The Cycle Of Desire 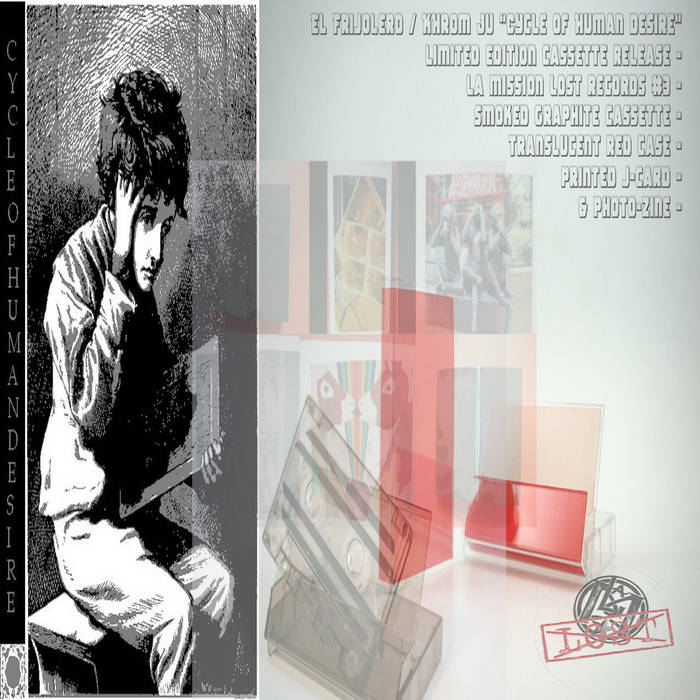 FBD029
Originally released on La Mission Berlin in 2017 (LMLR3, one of the "lost" records), The Cycle Of Desire was conceived in 2016 and is being reissued via this release. For this we are grateful...
From the project creators:
Side A is a continuous project produced in 4 hours by Khrom Ju. Nothing planned, long forgotten. Side B contains songs that were never completed, originally from a batch of music created between 2010-2011. The computer it was on got peed on and the clone backup was corrupted and experiencing merging issues. Thus the songs remain in their original forms, unfinished, and with a view of how things that have not been fully worked on can be half-baked at best...

This release was originally conceptualized as an examination of the effects of human desires for justice, truth, egalitarianism, hierarchy, power, understanding, avoidance of mortality, etc... the cycle of unexpected consequence. During the production, the two people working on the project together ended a long-term romantic relationship. The original photo-zine to accompany the release was replaced with a photo-zine consisting of photos from a wedding book gift. Half of the pages were filled with photos of the two spending time together. Over time more photos were to be added, eventually culminating in the completion of the book. It would be at this time the couple would marry. The inclusion of said photos was intended to draw parallels between the personal cycle and the human cycle of desire, shed light on inevitable conflict and the inability to fully understand/comprehend/possess perfect forethought... Unfortunately the music does not quite live up to such an accidentally perfect concept.